Myrna was employed for the City of Superior, working as an assistant to several mayors and then in the finance department for many years. She was a member of the Catholic Daughters of the Americas and Cathedral of Christ the King. Myrna was a big supporter of St. Jude’s Children’s Hospital.

Myrna was an avid bingo player, enjoyed taking bus trips to Casinos, and travelling with her husband Bill. She loved watching Law & Order SVU and was the ultimate energizer bunny her entire life right up until the end.

Myrna was preceded in death by her parents, her husband, William “Bill” Brennan and her sister, Beverly Pearson.

Visitation will be from 10 until the 11 a.m. Mass of Christian Burial, Friday, June 24, 2022, at Cathedral of Christ the King, Superior. Reverend Father Andrew Ricci will be the celebrant.

Following the Mass of Christian Burial, Myrna’s remains will be interred in Calvary Cemetery.

Memorials may be directed to St. Jude’s Children’s Hospital in Myrna’s name.

The family would like to thank the staff at New Perspective Senior Living-Superior for the great care and attention they gave Myrna.

To sign the online guestbook or send condolences, visit www.downsfh.com 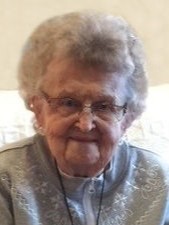