Madeline Lorraine Koch died peacefully at 7am, Monday, April 18, 2022 on a beautiful snowy morning with her son Paul at her side at St. Mary’s Essentia Hospital in Duluth.

She was born on Jan 2, 1926 to Peter and Felista DeGraef who both emigrated from Belgium at the end of WWI and married in 1920 at St. Anthony of Padua Church in Allouez area of Superior. She had 4 brothers; Frank, Clifford, Edward, and Alphonse, all of whom married and had many children. The DeGraef children attended their parish grade school and attended high school at East High in Superior. Madeline was active in grade school choir and sang Sunday Masses and special church Feast Days. She graduated class of 1944 at former East High School in East End.

Madeline worked at the Unemployment Office in Superior where she met her future husband Ludwig Koch in the unemployment line. They married in 1952 at St. Anthony’s Church. Ludwig studied and became an electrician and joined the local IBEW until retiring in 1995. They spent their retirement years at his parents’ property in Solon Springs. The first son Kurt was born in 1958 and then son Paul in 1961. Madeline was a devout Catholic like her parents. A lifelong parishioner at St. Anthony’s in Allouez.

Madeline was an avid card player and excelled at Smear. She also enjoyed crossword puzzles, sewing and embroidery, socializing, entertaining at home, eating out and especially her monthly “Club” meetings of 5 childhood girlfriends who met once a month for 50 years rotating at each other’s homes for a lunch, card games and fun.

In addition to her parents, Madeline is preceded in death by her husband, Ludwig in 2007; and her son, Kurt in 1992.

Requiem sung Mass at 11 am Friday, April 29, at St. Benedict’s Catholic Church in Duluth, 1419 St. Benedict Street, 1419 St. Benedict Street in Duluth. A short viewing at 10:30 in the church vestibule, rosary at 10:45 in church preceding. Requiem Mass at 11 am officiated by Father Joel Hastings and sung by St. Benedict Choir. Graveside following the Mass and is held at Evergreen Cemetery in Solon Springs, Hwy 53 S to County Rd A, west 0.3 miles to Cemetery Road, left south for 0.7 miles – Evergreen Cemetery on right. A simple luncheon follows Graveside Service in basement parish hall of St. Pius X Church on Business Hwy 53 in Solon Springs at 1:15-3 pm.

Please leave your condolences for the family at www.bratley-nelsonchapels.com. 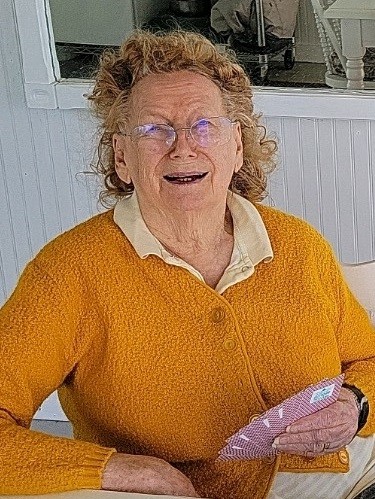