James Edward Tollas passed away on March 19, 2022, at Essentia Solvay House after a long battle with heart disease. His loving family was by his side.

Jim was born in St. Paul, MN on March 15, 1946, to Edward Carl Tollas and Francis Mae (Davids) Tollas. He was married to his high school sweetheart Susan Scheufeli. July would have marked their 55th anniversary. They lived in Blaine, MN until their move to Poplar, Wi in 1980.

Jim was a wonderful husband and family man. He raised 2 very good men, David and Jeffrey. He was so proud of them and their families. He was always there for them and tried not to go a day without a “How’s it going today” call to them. He loved his family with every breath. He could be stern but wore his heart on his sleeve. He coached his sons on many baseball and soccer teams in Blaine. He coached the Poplar Babe Ruth and All-Star teams. He enjoyed watching his grandchildren play sports, band concerts, parades and all their other activities.

Jim had a strong belief in volunteerism, community presence and helping others. Jim was a 25-year member of the Poplar/Wentworth and Brule Lion’s Clubs. He received many local, District and International awards, including being honored with a Melvin Jones’ Fellowship. He was proud to participate in the Lion’s community service projects, was involved with the Lion’s Youth Vision Screening at the Maple School District and Douglas Co schools. He recruited many new members to his clubs.

He was an active Poplar Village Trustee and a member of the Poplar Sewer Commission, resigning in January due to his health.

Jim made it a point to routinely check in on his neighbors to see that all was good or if there was anything he could do for them.

He loved hunting, fishing and Packers and Brewers. He looked forward to deer hunting with his son and grandsons. He Colorado Elk hunted with his buddies at their Lazy Elk Hunting Lodge up until his health would not allow him to hunt any longer. He made many lasting friendships at the Lodge.

He is preceded in death by his parents, sister Mary Horner, brother John.

His family would like to give sincere thanks to all the caring doctors and staff at Essentia Superior, Dr. George Holliday, Dr. Benzinger and all the Essentia Heart Failure Department; the Essentia Hospice and the Solvay House for helping him through his end-of-life struggle. Thank you to Carey Vik for his friendship and for helping Jim with his spiritual journey. He was at peace. 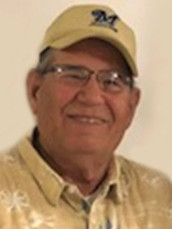